hypanis.ru Bruce Springteen Tweets for Missing BC Student As His Home is Searched For Clues - All Bruce Springsteen
RSS 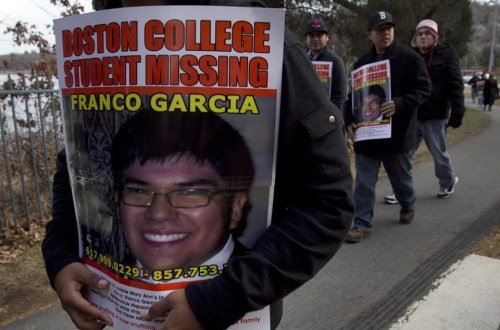 Newton and State Police are searching Franco Garcia’s home in Newton today in hopes of finding a piece of information that may help locate the missing Boston College student.

“State and Newton police are at the house,” said Newton Police Lieutenant Bruce Apotheker, a spokesman for the department, which is leading the investigation. “They are trying to find some clue, some investigatory lead, that would help them in the search for this missing young man.”

Investigators turned their sights on Garcia’s family home as State Police divers today searched the Chestnut Hill Reservoir for the third straight day — but with the same frustrating result.

“They found nothing on the [reservoir] bottom that would be considered in any way relevant to this case,” said State Police spokesman David Procopio, who said divers would be back in the reservoir Friday. “It is our devout hope that we will be able to bring Franco home to his family safely.”

Procopio said Garcia’s family supported searching their West Newton home. He said investigators are hoping to find something the family innocently overlooked, but might be noticed by trained law enforcement officers such as a “phone number, a scrap of paper, anything.”

Officials and his family have said Garcia was last seen around 12:30 a.m. last Wednesday by friends at Mary Ann’s, a Brighton bar long popular with BC students. He parked his car on campus, which is in walking distance of the bar.

As they have since he failed to return home last Thursday, Garcia’s family today participated in the search, and were at the reservoir handing out missing posters to passersby.

Garcia’s family also quickly turned to social media for help in spreading the message that he was missing, and that his family wanted him safely home.

Today, they picked up the support of musician Bruce Springsteen, who tweeted a link to a missing poster created for the Garcia family. Springsteen’s son is a student at BC.

Also today, BC alerted students that counseling is available to anyone on campus who may feel the need for some emotional support.

Garcia has been taking three classes at BC where he is studying chemistry. He also plays clarinet in the symphony band, trombone in the marching band, and is a certified pharmacy technician at a CVS in Waltham.

Procopio said State Police divers will be back at the reservoir Friday for a final search, skipping Thursday due to expected bad weather.

This week, he said, divers have been in the water for three days and multiple police agencies have participated in searches of the area near the bar, around the reservoir, abutting streets, homes, nearby rail tracks, and abandoned buildings.

“It remains a missing persons case,” Procopio said. “There is no evidence to indicate foul play but foul play has not been ruled out.