by vcartier on April 29, 2012 at 9:19 pm
Posted In: Bruce springsteen
(The Times-Picayune, David Grunfeld/ Associated Press ) – Bruce Springsteen and the E Street Band play the Acura Stage at the 2012 New Orleans Jazz and Heritage Festival presented by Shell on Sunday, April 29, 2012.

NEW ORLEANS — Bruce Springsteen has closed out the first weekend of the New Orleans Jazz & Heritage Festival with a 2 ½-hour show that combined crowd-pleasers such as “Born to Run” with the cover tune of his new CD, “Wrecking Ball.”Fans began staking out spots when the Fair Grounds opened at 11 a.m. Sunday, rushing from the entrance gates to spread blankets and set up chairs as close to the stage as possible. By the time Springsteen stepped on stage fans stretched around the fairgrounds track, some standing 10 to 12 people deep.

At one point New Orleans legend Dr. John took the stage with Springsteen for a number.

But if Springsteen was the biggest draw of the day, he was far from the only one.

Soul singer Al Green closed out the day on the Congo Square stage, drawing his faithful.

Copyright 2012 The Associated Press. All rights

Springsteen Packs Them In For Jazz Fest

NEW ORLEANS (WTW) — With the audience packed shoulder to shoulder and stretched well past the edges of the field that normally holds the crowd, Bruce Springsteen delivered a high-powered, energetic 2 hour show to close out the first weekend of the New Orleans Jazz & Heritage Festival.

The crowd, which began staking out spots when the grounds opened at 11 o’clock Sunday morning, stretched around the track at the Fair Grounds, where the event is held, standing 10 to 12 people deep.

Becca Reynolds said Springsteen was the thing that finally made her decide on making the trip from New York City to New Orleans. She was one of many from around the country that made what seemed as much a pilgrimage as trip to see “The Boss.”

The festival continues next weekend.

Bruce Springsteen fans lined the entrances to the New Orleans Jazz Fest on Sunday to stake a claim at the Acura Stage. By 11 a.m., they had laid down tarps and unfurled flags, all for a chance to catch a glimpse of the Boss. After all, it’s the day thousands have circled on their calendars for months.

Doug MacCash/The Times-PicayuneFans of Bruce Springsteen, Dr. John and Trombone Shorty made for a wild scene at the Acura Stage early Sunday afternoon at the New Orleans Jazz Fest.

This is the first time Springsteen has played New Orleans since his widely remembered New Orleans Jazz Fest performance in 2006, and some traveled from as far as Ontario and arrived as early as 7 a.m.

“It was like cattle all going into the lines,” said Darlene ter Huurne who was one of the first in line at the Sauvage Street entrance “We had two people who had the tarps and were going to try and get a spot. Everyone just ran and they were running over people to get a spot near the stage.”

Ter Guurne hit the side gate at 6:56 a.m.with her sisters and friends from across the country. They wore bright pink shirts that read, “It’s Hard to be a Saint in the City,” a dual nod to Springsteen and New Orleans.

Their three camp flags, American, Canadian and E Street, even paid homage to the Boss. “We wanted to get the flag in honor of Clarence Clemons because we loved him and followed him as well. We made our flag to honor their friendship and their band and their music playing,” Ter Guurne said.

Although Jazz Fest materials say the Fair Grounds gates will be opened at 11 a.m., the exact time the crowds are released seems open to individual interpretation. Michael Cuslidge, from Mizoula, Mont., was also one of the first in line at the Sauvage Street gate at 7:10 a.m. He said things got a little crazy.

“Some of us waited three hours to get in and the people who showed up five minutes before and were forcing their way in and at 6 foot 4, 240 pounds, I was swept up in a wave I couldn’t prevent,” Cuslidge said. Cuslidge seems to have already forgotten the dust-up. A self-described “dead-head,” Cuslidge has taken over the Bruce-to-Missoula coalition.

“Bruce has not played four states: Montana, North Dakota, South Dakota and Alaska. The Rolling Stones and Pearl Jam have played Missoula and we would love to see Bruce Springsteen in Missoula,” he said

For now, Cuslidge will just have to put up with the heat and humidity in New Orleans.

Check back later for our review of Bruce Springsteen and the E Street Band on the Acura Stage.

The second of back-to-back nights at the Los Angeles Memorial Sports Arena on Friday  saw Bruce Springsteen and the E Street Band play a 25-song, three-hour show with even a pre-show surprise.

Bruce gave the early arrivals a treat when at 7:35 p.m. (Pacific Time), he  came out to the stage with many of his relatives (some who he introduced) and  did a solo acoustic “For You.”

Later, in the real show, there were two tour premieres: “No Surrender,” which opened and “Bobby Jean.” 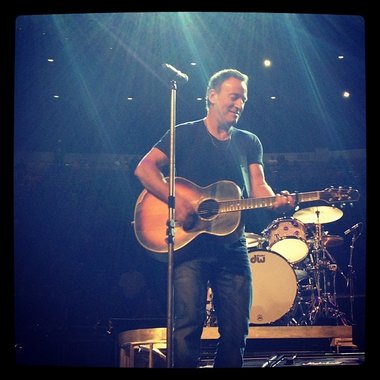 johannabclark/InstagramBruce Springsteen surprises the early arrivals at his Friday night show at the Los Angeles Memorial Sports Arena with an acoustic “For You” and hour before show time.

“No Surrender” is the third different song Bruce has opened shows with on the Wrecking Ball Tour, joining “We Take Care of Our Own” and “Badlands.”

Once again, Tom Morello from Rage Against the Machine joined in on  four songs.

Bruce acknowlededged his guitar tech Kevin Buell (from Ocean Township) who was working his 1,000th show. Buell started working for Springsteen in 1985.

There were seven different songs from Thursday night and interesting to see “The Promised Land” not in the set list for only the second time this tour. I would like to see it given a rest every now and then.

Also “Thunder Road,” which had been predominant  main set closer,  was not played for the second straight show 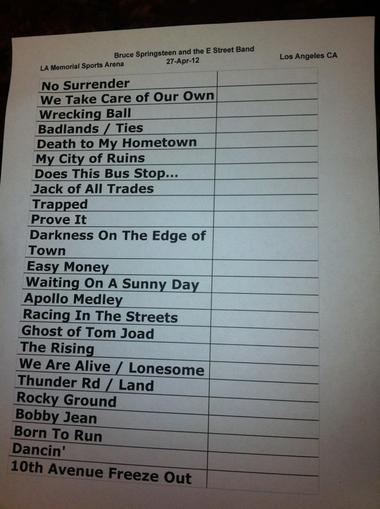 The printed set list from Friday night’s Los Angeles show. “Trapped,” “Ties That Bind” and “Thunder Road” were listed but not played.

Over at 11;43 p.m. for a three-hour show.
Next show: Sunday at the Jazz Fest in New Orleans (should be a great one) and then Bruce and the band return to New Jersey for Wednesday’s show at the Prudential Center in Newark.

Bruce Springsteen and the E Street Band began the first of back-to-back shows at the Los Angeles Memorial Sports Arena on Thursday night with a 25-song set that included three tour premieres.

Joining Bruce on four songs was Tom Morello of Rage Against the Machine. One of those songs was the tour premiere of “The Ghost of Tom Joad” which Morello has played a few other times with Bruce and the band and is always a hot performance. 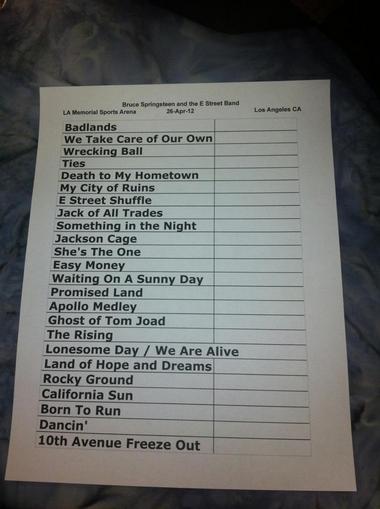 The printed set list from Thursday night’s Los Angeles show. Only change was “Candy’s Room” being played instead of “Jackson Cage.”

A friend on Facebook wrote: “The Morello solo during Tom Joad when he plays with E Street is beyond mind blowing.”

Morello also joined in on “Death to My Hometown,” “Jack of All Trades” (which he played on the studio cut) and the evening’s final song, “Tenth Avenue Freeze-out.”

The other tour premieres were “Something in the Night” and “California Sun,” the latter a cover that reached No. 5 on the Billboard Hot 100 by The Rivieras in 1964.

It was only the third time Bruce has performed “California Sun,” the first being on Oct. 26, 1984 at the same Sports Arena (as part of the “Detroit Medley”) and on Nov. 9, 2007 at the Joe Torre Safe at Home dinner at Chelsea Piers in New York City. 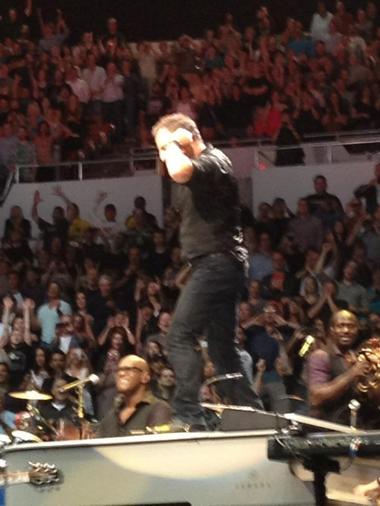 Patti Scialfa was at the show after missing the previous five.

Next show: Friday night again st the LA Sports Arena and then it’s off to New Orleans for the Jazz Fest on Sunday.

My prayers go out to Bruce, his mother and family.

FREEHOLD, N.J. — One of Bruce Springsteen’s much-adored aunts has died at the age of 92.

Dora Kirby of Freehold, N.J., was honored at Ellis Island in April 2010 along with the rocker’s mother and a third sister.

He said the Italian-American Zerilli sisters personified the “tough optimism and the work ethic of first-generation-born American citizens.” He said they lifted his spirit and “put the rock and roll” in him.

The Asbury Park Press (http://bit.ly/IHWCAB ) says Kirby graduated from Rutgers University in 1983 and got her real-estate license in 1989. Springsteen proudly noted at Ellis Island that Kirby was still available for tax work.

The Freeman Funeral Home says she died Wednesday. Her funeral will be Saturday at St. Rose of Lima Church in Freehold.

The concert was announced Wednesday morning. The Aug. 29 Springsteen concert begins at 7:30 p.m. with doors opening at 5 p.m.

Tickets are priced at $108 and include parking and facility fees. Tickets go on sale Sat. April 28th at 10 a.m. at www.ticketmaster.com, charge by phone 800-745-3000 as well as at the Vernon Downs Players Club