by vcartier on September 8, 2012 at 7:02 am
Posted In: Bruce springsteen, Bruce Springsteen & the E Street Band Tour 2012
Greg Kot Music critic12:46 a.m. CDT, September 8, 2012
Bruce Springsteen packs his concerts to bursting, and still it wasn’t enough Friday in the first of two sold-out shows at Wrigley Field. There were 28 songs, 18 musicians and singers in the newly expanded E Street Band, and guest shots from Pearl Jam’s Eddie Vedder and Rage Against the Machine’s Tom Morello.

And then there were the ghosts.

“May you walk with them well and listen to what they tell you,” Springsteen said with a wry smile. He devoted the sole extended monologue of the night to the departed, and returned to the theme again and again, right up until the end when he paid brief tribute to his late friend and on-stage foil, saxophonist Clarence Clemons.

“Are we missing anybody, tonight?” he shouted at one point. It was both a personal and political statement, punctuated by “We are Alive,” which linked the civil rights, labor and immigrant movements across the centuries to the present-day struggles of society’s voiceless.

Though Springsteen made no overt political speeches or statements – the words “election,” “Occupy” or “1 percent” were notably missing in action – there was no mistaking the subtext of many of his songs. This was a night devoted to several potent ideas, notably the power of informed dissent, and the dignity and opportunity afforded by a day’s work. For Springsteen, the ability of men and women to roll up their sleeves and earn an honest wage is as sacred as any human right. He may be a rich rock star now, but he grew up in a blue-collar New Jersey family and was immersed in a community where everything had to be earned, sometimes at great personal cost.

That struggle was put into wrenching perspective by the midsection of the show, which drew heavily from his latest album, “Wrecking Ball.” Though the recording sounds constrained with its flat production, the songs have acquired teeth on this tour.

The E Street Band played with renewed vigor thanks to the injection of some fresh faces, including a five-piece horn section with Clemons’ saxophone-playing nephew, Jake. The horns and reeds underlined the Celtic-punk of “Death to my Hometown” and the hard swing of “Wrecking Ball.” Springsteen’s smile turned to a scowl on the scalding indictment of the entitled in “We Take Care of Our Own.”

The set’s musical reach was typically wide and ambitious, touching on everything from protest folk to soul and hard rock, with Garry Tallent’s bass a towering presence throughout. Morello’s guitar solo brought home a scarifying “Ghost of Tom Joad” and Vedder’s harmony vocals accented the desperation just below the surface of a chilling “Atlantic City.” “We Are Alive” evoked Johnny Cash, and Curtis Mayfield’s civil-rights anthem “People Get Ready” echoed through “My City of Ruins” and “Land of Hope and Dreams.”

Springsteen and his many accomplices framed the heavy stuff with dance songs and fist-pumping celebration. “Prove it All Night” set the tone, followed by a ferocious “My Love Will Not Let You Down” – one of the hidden gems in Springsteen’s songbook, especially because of Max Weinberg’s atomic drum fills.

The E Streeters played until a few minutes shy of midnight, closing with a cover of the Isley Brothers’ “Twist and Shout.” Springsteen’s shirt was soaked through as he and the band stepped to the lip of the stage to join the shimmying couples in the aisles. Even after blitzing through 3 ½ hours nearly without pause, neither the band nor the audience seemed to be in a hurry to call it a night.

1 Prove it All Night

2 My Love Will Not let You Down

3 Out in the Street

5 We Take Care of Our Own

7 Death to My Hometown (with Tom Morello)

8 My City of Ruins

9 Spirit in the Night

11 Jack of All Trades (with Morello)

18 None but the Brave

19 Ghost of Tom Joad (with Morello)

21 Land of Hope and Dreams

25 Dancing in the Dark

28 Twist and Shout (Isley Brothers cover with Vedder and Morello) 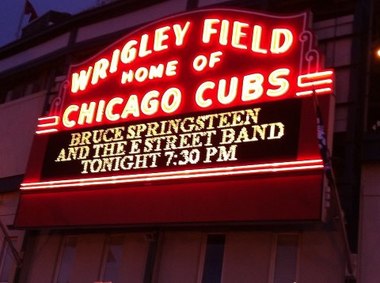 Photo by Christine SahagianBruce Springsteen and the E Street Band played their first ever show at Chicago’s Wrigley Field on Friday night.

Bruce Springsteen’s first-ever show at Wrigley Field in Chicago on Friday night featured two special guests: Eddie Vedder and Tom Morello. There were rumors that Vedder, who was at Monday’s show in Philadelphia but did not play, would take the stage with Bruce in Chicago. He came up to sing with Bruce on “Atlantic City” and later joined in on “Tenth Avenue Freeze-out.”

Morello, who has joined Bruce several times already this tour, joined in on “Death to My Hometown,” “Jack of All Trades,” “Ghost of Tom Joad” and “Tenth Avenue Freeze-out.”

One tour premiere, “None But the Brave” was played in the 28-song, three-hour-and-27-minute show. 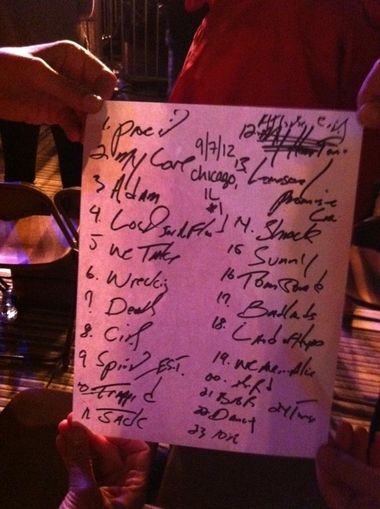