Special thanks to the Orange County Register and  BRADY MACDONALD | bmacdonald@scng.com

A colorful collection of actors, musicians and politicians have been kicked out of the Happiest Place on Earth.

A colorful collection of actors, musicians and politicians have been banned, barred or ejected from Disneyland over the years for behaving badly at the Happiest Place on Earth — and many more have fallen just short of being kicked out.

Shoreline Mafia member Ohgeesy and his entourage were ejected this week from Disneylandafter an alleged gun threat, but the Los Angeles rapper is not the most famous celebrity kicked out of the Anaheim theme park.

With more than 700 million visitors over the past half century, Disneyland is bound to get a few bad apples every once in awhile.

An ex-Marine from New York was kicked out of Disneyland after unfurling a Trump 2020 reelection banner on the Mark Twain riverboat. A family brawl in Toontown that went viral resulted in criminal charges. A 1970 protest by Yippies in Disneyland led to arrests and the closure of the park.

Celebrities tend to get VIP treatment at Disneyland and expulsion of famous stars from the park is rare. Let’s take a closer look at the five most famous people to be banned, barred or ejected from Disneyland.

Bruce Springsteen and his E Street Band guitarist Steven Van Zandt were thrown out of Disneyland in 1983 for violating the park’s dress code, according to memoirs by both musicians.

The E Street entourage was “unceremoniously thrown out of Disneyland for refusing to remove our bandanas,” wrote Springsteen in his “Born to Run” autobiography.

Disney security was worried Springsteen and Van Zandt would be misidentified as gang members if they didn’t remove their bandanas.

But the E Street gang couldn’t get into Knott’s either — for the same reason.

“At Disneyland, enforcing this ridiculous law is also an attack on rock and music and all the people who believe in it,” Little Steven wrote in a 1983 letter. “They’re telling me nobody rocks in the Magic Kingdom. Nobody expresses their individuality in the Magic Kingdom except maybe that guy in the rodent suit.”

Van Zandt was furious at the slight and called for a boycott of the Mouse House.

“It is time to boycott Disneyland until the vague and unfair dress code they enforce is abolished once and for all,” Van Zandt wrote.

“Gossip Girl” star Blake Lively told talk show host David Letterman a story about being thrown in the Disneyland jail as a 6-year-old and getting banned from the theme park for a year.

“It was really scary and traumatizing,” Lively said on the “Late Show with David Letterman” in 2009.

The Tarzana native grew up going to Disneyland every week as a child in the 1990s.

“My mom would take me out of school and take me to Disneyland,” Lively told Letterman.

Lively and her brother tried to enter Disneyland with a transferred re-entry stamp.

“You get a stamp when you leave the park,” Lively said. “If you spray hairspray on it, you can transfer them to someone else’s hand.”

The siblings were caught and detained by Disney security, she said.

“We go downstairs in Disneyland,” Lively said. “It’s all white rooms. Everyone is dressed in all white. The furniture is all white. They just interrogated us.”

Former U.S. president Barack Obama was kicked out of Disneyland as a student at Occidental College for smoking in a gondola on the Skyway attraction.

“I’m ashamed to say this, so close your ears young people, but a few of us were smoking on the gondolas,” Obama said during an Anaheim political campaign stop in 2018.

“These were cigarettes, people,” he clarified to a bit of laughter.

Disney security was waiting for Obama and his friends as they got off the Skyway in the early 1980s.

“There’s these two very large Disneyland police officers and they say, ‘Sir, can you come with us?’” Obama recounted. “They escort us out of Disneyland.”

“This is a true story, everybody,” he continued. “I was booted from the Magic Kingdom.”

“Obama just opened his speech in Anaheim with a story from his college years about getting kicked out of Disneyland for smoking cigarettes on a ride,” Iger tweeted. “He can always come back, as long as he doesn’t smoke.”

Former Disney CEO Micheal Eisner also jumped on Twitter to make it clear he didn’t boot the future president from the Mouse House.

“Just to be clear. I was not CEO Of Disney when Barack Obama was at Occidental College and was ‘booted’ out of Disnyland for smoking a cigarette,” Eisner tweeted. “Knowing he was going to be President, I wouldn’t do that :)”

Soviet leader Nikita Khrushchev was barred from Disneyland in 1959 for security reasons before he even had a chance to step foot in the Happiest Place on Earth during a visit to the United States.

Khrushchev fumed at the perceived insult.

“I was told that I could not go to Disneyland,” Khrushchev said. “I asked, ‘Why not? What is it? Do you have rocket-launching pads there?’ I do not know.”

The U.S. State Department said Khrushchev’s wife and daughters were welcome to visit Disneyland, but they declined.

“What is it?” he asked. “Is there an epidemic of cholera there or something? Or have gangsters taken over the place that can destroy me? Then what must I do? Commit suicide?”

by vcartier on August 9, 2019 at 1:30 pm
Posted In: Bruce springsteen, Bruce Springsteen Music

Springsteen Archives if offering : The Bridge School Benefit ’86!  Log onto live.brucespringsteen.net and click on Live Music and you can purchase the latest  of Bruce classic shows of his career.  You can also access any of the past shows that have been offered.  This is a great way to those talked about concerts of Bruce’s career.  He also offers shows when he is on tour.  He does at least one download a month! 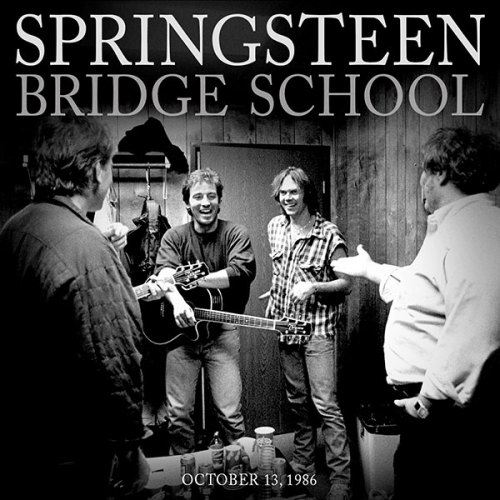 The Ongoing History of New Music, Episode 858: The Alt-Rock Influence of Bruce Springsteen

Special thanks to Allan Cross & The Journal of Musical Things.com

This is a great site for music lovers….I hope you will support Allan and his history of Ongoing New Music..

I’m always looking for new ways to explore the world of alt-rock, so I’m trying a slightly different tack with this episode. While Bruce Springsteen is a long way off from the alternative universe, he has had a surprising impact on our music. This show names names and illustrates how far that influences has actually gone.

Songs on this program include:

The Ghost of Tom Joad/Rage Against the Machine

Killers, When You Were Young

If you’d like to listen along, here’s the playlist created by Eric Wilhite.

The Ongoing History of New Music can be heard on the following stations:

We’re still looking for more affiliates in Calgary, Kamloops, Kelowna, Regina, Saskatoon, Brandon, Windsor,  Montreal, Halifax, Charlottetown, Moncton, Fredericton, and St John’s and anywhere else with a transmitter. If you’re in any of those markets and you want the show, lemme know and I’ll see what I can do.

If you ever miss a show, you can always get the podcast edition available through Apple Podcasts, Spotify or wherever you get your on-demand audio.

Will Bruce Springsteen and the E Street Band be coming back with a new tour? Max Weinberg lets us know

Max Weinberg performs in concert with Bruce Springsteen and the E Street Band during their The River Tour 2016 at the Royal Farms Arena on Wednesday, April 20, 2016, in Baltimore. (Photo by Owen Sweeney/Invision/AP)

Max Weinberg joins Pete McMurray to talk about his connection to Chicago and playing alongside the legendary E Street Band.

Use Up/Down Arrow keys to increase or decrease volume.