Two decades after it was written, song was released on soundtrack to Blinded By The Light

Bruce Springsteen has released a lyric video for “I’ll Stand By You,” a previously unreleased song that appears in the new movie Blinded By The Light. The visual features the lyrics from the song along with scenes from the movie, which is about a Pakistani teenager growing up in 1987 Britain who falls under the spell of Springsteen’s music.

Springsteen wrote “I’ll Stand By You” at some point in the late 1990s or early 2000s, inspired by the Harry Potter books he was reading to his young children. He recorded it in 2001 and offered it to director Christopher Columbus as he was filming Harry Potter and the Philosopher’s Stone. It was rejected because J.K. Rowling’s contract said that no commercial songs could be used in the film; the entire soundtrack is composed of John Williams’ score for the movie. 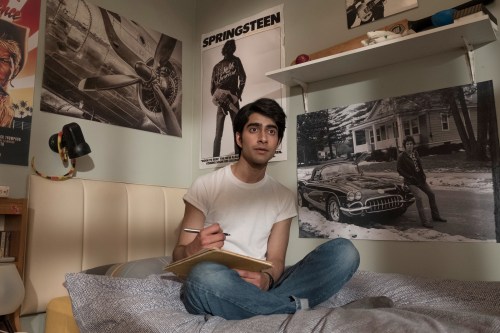 ‘Blinded by the Light’: Bruce’s Music Is a Gift for a British-Pakistani Teen

“It was pretty good, it was a song I wrote for my eldest son, it was a big ballad that was very uncharacteristic of something I’d sing myself,” Springsteen said in 2016. “But it was something that I thought would have fit lovely. At some point I’d like to get it into a children’s movie of some sort because it was a pretty lovely song.”

“Ill Stand By You” is the only unreleased Springsteen on the soundtrack, but it also includes rarities like “The River” like at the Madison Square Garden No Nukes concert in 1979, an acoustic “The Promised Land” live on the National Mall in Washington DC in 2014 and “Thunder Road” live at L.A.’s Roxy Theater in October 1974.

Springsteen made a surprise appearance at the Asbury Park, New Jersey premiere of Blinded By the Light where he performed a four-song set with Southside Johnny & The Asbury Jukes. His future plans are somewhat vague, though he’s said he has written songs for a new E Street Band album that he hopes to release in 2020 and then tour behind.

This posting is about Aldi Supermarkets that are based in Australia selling albums from some of the top charting artists.  Not sure if the US Aldi’s are selling these albums.  From what I see in the photos of the albums, these are or should be considered bootleg offerings as they are not artist issued albums. The titles in questions are offered on the ‘Musicbank’ label, and fine print on the album covers is reported to state “they have licensed the music for home use”.

Some forum commentators have alleged the albums are bootlegs, while others have suggested that the titles released may be out of copyright and free for anyone to reproduce.

Musicbank Limited predominantly releases live albums, and describes itself on its Facebook page as “an entertainment company that deals with audio-visual production, advertising and talent management.”

Searches reveal that official websites relating to Musicbank are no longer active, and the only email address is a free Gmail address.

When contacted about possible copyright issues by ALDI selling the LPs, the Australian Recording Industry Association (ARIA), said they would liaise with Music Rights Australia to investigate further.

Time Life to Release ROCK AND ROLL HALL OF FAME: IN CONCERT 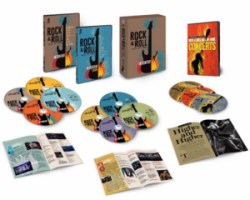 Each year, the Rock and Roll Hall of Fame honors rock music’s pioneering figures during a prestigious, black-tie ceremony. As the Hall of Fame enters its third decade, it’s these extraordinary induction ceremonies — featuring the biggest names in classic rock from the ’60s, ’70s and ’80s – that have become nearly as epic as the artists they celebrate. On September 6, Time Life and the Rock and Roll Hall of Fame give home audiences front row seats to the unforgettable ceremonies from 2010-2017 with the 11-disc collector’s set ROCK AND ROLL HALL OF FAME: IN CONCERT.

On this new-to-retail collection, singular performance highlights include:

The two surviving members of Nirvana joined on stage by Lorde, Annie Clark, Kim Gordon and Joan Jett for emotional renderings of the group’s biggest hits.

Cat Stevens performing a spine-tingling version of “Father & Son” that turned the massive Barclay Center quiet as a church.

Ringo Starr being welcomed into the Rock Hall with a little help from Paul McCartney.

Original Cheap Trick drummer Bun E. Carlos joining the band for the first time in 6 years tearing through their early hits including “Surrender” and “Dream Police.”

The legendary Canadian power trio Rush performing fiery classics “Tom Sawyer” and “The Spirit of Radio” for their fervent fans.

Heart going “Crazy on You” before being joined onstage by fellow members of Seattle rock royalty from Pearl Jam and Alice in Chains.

Alice Cooper ripping into ferocious versions of “Eighteen” and “Under My Wheels” before closing the set with Rob Zombie on “School’s Out.”

The Hurdy Gurdy Man Donovan is joined onstage by John Mellencamp for a chilling performance of “Season of the Witch.”

Five of the original members of Chicago performing on stage for the first time in 25 years.

Mick Jagger and Fergie in a blistering version of the Stones’ classic “Gimme Shelter,” with U2 as the backing band.

Paul Simon, David Crosby and Graham Nash join together for a spine-tingling “Here Comes the Sun.”