Next Time You Wear a Suit, Wear It Like Bruce Springsteen

In other words: Keep it simple. 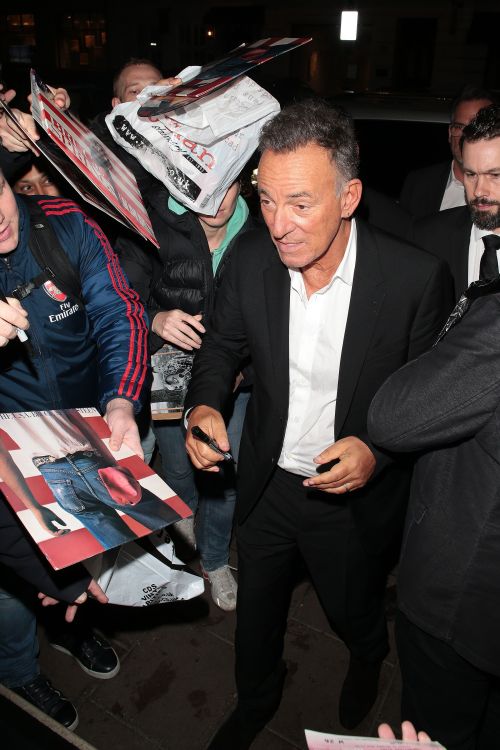 I can’t quite tell whether something about Bruce Springsteen’s look has fundamentally shifted, or if I’m just paying closer attention since he fried all my synapses by wearing a black dress shirt that I didn’t hate. Either way, the Boss seems especially adept at getting a fit off recently, as exhibited most recently at the BFI London Film Festival, where he attended the premiere of Western Stars.

While greeting throngs of fans—more than a few of whom with vinyl copies of Born to Run in hand—and walking the red carpet, Springsteen wore a black suit, a white shirt, and black boots. That’s all. No tie. No pocket square. No extraneous accessories of any kind. It’s a completely stripped-back look, and that’s what’s so great about it. Where so many elder statesmen of rock opt for sometimes-uncomfortable excess (see: Steven Tyler), Springsteen keeps it as simple as can be.

Now, let’s be real here: There are a couple places where this suited look could have gone from an object lesson in sartorial minimalism to one in transcendent tailoring in general. Basically, if Bruce had taken a quick trip to the tailor and brought up both the pants and the sleeves so they didn’t hang quite so long, that would have been great.

But sometimes life intervenes. Sometimes you just don’t have a spare moment to get those alterations done. And when that happens, you can do a whole lot worse than a clean black suit and a crisp white shirt. Bruce knows this. And so do you. Consider it, next time you suit up. 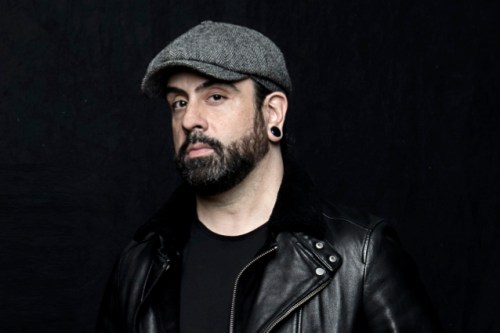 In a brand new interview with Ireland’s Overdrive, former ANTHRAX and current VOLBEAT guitarist Rob Caggiano recalled the “incredible experience” of working with Bruce Springsteen during a studio session more than a decade ago.

Caggiano, who made a name for himself as a producer and engineer in the early 2000s, brought up his brush with the Boss while discussing “defining” moments in his career.

He said: “I was very fortunate to have worked with Bruce Springsteen. I was producing an album for a musician called Jesse Malin, who’s a great friend and fantastic musician from New York City. Basically, Bruce is a fan of Jesse‘s music and originally he was going to be playing guitar on the record, and I was, like, ‘No fucking way! Are you kidding me?’ So, we have this B-side tune that Jesse played for me during the pre-production. The track was called ‘Broken Radio’ and he was saying, ‘It’s not gonna be on the album. It just doesn’t fit.’ So he plays me this song, and not only was it the best song out of the lot, it was absolutely perfect for Springsteen. I suggested that Jesse record the track and send it to Bruce with a hand-written letter and let’s just see what happens. So, months and months go by and we’re almost done with the record and about to mix. Jesse was in the vocal booth and I heard the phone ring and I knew instantly who it was. It was Bruce Springsteen… He was saying how much he loved the song and invited Jesse and I up to his house in New Jersey to record. He has many houses, but this is his ‘studio house,’ if you know what I mean. His engineer Toby Scott, who has been Bruce‘s engineer since back to ‘Born in The USA’, lives in this house. We showed up early and we’re setting everything up, and Toby, who’s a legendary engineer, says, ‘How did you arrange this with Bruce?’ And I said, ‘What do you mean?’ And his response was, ‘This has never happened before. Like, never!’ Apparently, when Bruce guests on an album, which is not that much, he asks for the tapes to be sent to him and he records his parts and send them back. So, that was a pretty incredible experience for me personally.”

VOLBEAT is continuing to tour in support of its seventh album, “Rewind, Replay, Rebound”, which was released on August 2 via Republic Records. The disc was produced by longtime collaborator Jacob Hansen and co-produced by Caggiano and Michael Poulsen. This marks the first studio album with Kaspar Boye Larsen on bass.

Bruce Springsteen Film is a Love Letter to Patti Scialfa

Hot Press was in London yesterday for the launch of Western Stars, and couldn’t have been any more blown away!

Bruce Springsteen was in ebullient form on Saturday – is he ever in anything else? – as he attended the London media launch of Western Stars, the cinematic take on the album of the same name, which he’s co-directed with longtime collaborator Thom Zimny.
Looking far better than a man who recently turned seventy has any right to do, Bruce explained the origins of the project in the Q+A session with Edith Bowman, which followed the screening.
“It was an unusual piece of music; I knew I wasn’t going to tour it and bring an orchestra, so I said, ‘Maybe if I could perform it once and film it, that way people get a chance to see what it’s like to play,'” he said. “Initially it just started out as a performance film. I was just gonna shoot the record from start to finish. And so that’s what we did. We decided the barn was a great space to do it.”
The barn in question is the century-old building that graces his and Patti’s property in Rumson, New Jersey. Managing to squeeze a 30-piece orchestra and a full band on to its small stage, the live performance part of Western Stars is as epic as you would imagine it to be.
What makes it different to your average concert movie are the short films Bruce and Thom conjured up as introductions to its fourteen songs, which is one more than you’ll find on the original album. Fearing that the ending might otherwise be too downbeat, Bruce came up with the last minute idea of covering ‘Rhinestone Cowboy’, the tune penned by fellow New Jerseyan Larry Weiss and turned into a stonewall American classic by Glen Campbell. It turns out to be a masterstroke worthy of the price of admission alone.
In Irish cinemas for one night only on Friday October 28, the one hour 22 minute movie is equal parts Bruce mythologising America’s southwest and demythologizing himself.
While all of the themes are familiar – “My 19th album and I’m still writing about cars – or the people in them,” he jokes on screen – he’s probably never spoken with such warmth about his relationship with Patti Scialfa who’s rightly credited as the special guest star.
As recently rediscovered footage of them honeymooning together in a log cabin plays, Bruce whispers the sweetest of nothings to the woman who’s accompanied him on a massive part of his rock ‘n’ roll adventure.
“We’ve been together for a long time, 30 years, so that’s a lot of experience around the one little microphone,” he said yesterday in London. “So we bring all of that the minute we lean in. Oh my Lord, there’s the whole 30 years of emotional life together between us. She’s wonderful. If you dig deep down into the centre of the film, she’s there.”
Needless to say, Hot Press was in the front-row with our box of Boss popcorn for the screening, and will be bringing you a full report as part of the mega Bruce and Steve Van Zandt feature we have in our 1,000th Issue, out this Thursday with Bono, Edge, Sharon Horgan, President Michael D. Higgins, Joaquin Phoenix, Emma O’Donoghue, Brian Eno and Ardal O’Hanlon among the co-stars.

Western Stars is in Irish cinemas for one night only on Friday October 28. The soundtrack album is released on October 25.