A Bruce Springsteen-Inspired Tour of the Jersey Shore, in 10 Stops

Go see “Blinded by the Light,” then visit the real thing 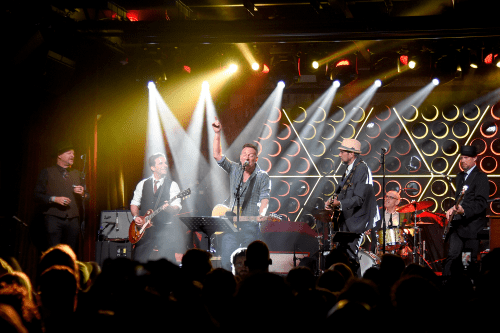 Springsteen performing at the Grand Re-Opening of Asbury Lanes in June 2018
KEVIN MAZUR/GETTY IMAGES FOR ISTAR
BY DIANE ROMMEL / AUGUST 13, 2019 8:51 AM

This week sees the release of the effervescent Blinded by the Light, which tells a story Bruce Springsteen fans around the world already know by heart: the transformative power of his music.

Based on Sarfraz Manzoor’s memoir Greetings from Bury Park, both film and book focus on a Bruce-obsessed teen’s coming of age in Margaret Thatcher/the Human League’s England. Springsteen gave the film his seal of approval — and even played the titular song at the movie’s Asbury Park premiere last week. As one of the film’s actors, Aaron Phagura said at the event: “Bruce is a guiding light in this shitty world.”

Happily, it’s easy to recreate Manzoor’s power move, recorded in book and movie alike: a pilgrimage to Asbury Park. The iconic Shore town may be newly fancy-fied, but its Springsteen connections run as deep and true as ever.

Asbury Park’s lodging options have greatly expanded since Manzoor made his trip in 1990. Our pick: The Asbury, which is a five-minute walk to the Stone Pony. (For more on non-Bruce-specific spots in Asbury Park, see here.)

Springsteen and crew came to Asbury Park for the legendary, now-long-closed Upstage: “We all moved to Asbury Park because of that club,” Stevie Van Zandt told the New York Times, in an extensive oral history of the Stone Pony. When it closed, they needed a new venue, and the Stone Pony was it. Forty years later, Springsteen still shows up here for unscheduled appearances — as he did just last month in support of the E Street Band’s Gary Tallent.

The “Greetings from Asbury Park” sign on top of Convention Hall isn’t the only Springsteen connection: this is where he and the band get ready for upcoming tours and perform the occasional Christmas show.

The most recent Springsteen appearance was here: last week’s Blinded by the Lightperformance.

While Springsteen’s childhood home (at 87 Randolph Street) was torn down to make way for a church parking lot, 39½ Institute Street stands still: “No hot water, four tiny rooms, four blocks away from my grandparents.” (It sold in 2018 for $255,000, if you’re wondering how much a piece of Springsteen’s childhood would set you back.)

This is the house where Springsteen lived as a teenager. When his parents moved to California, Springsteen stayed on: “My family home of seven years was instantly transformed into a hippie frat house,” Springsteen wrote in his memoir, Born to Run.

The “10th Avenue” of “10th Avenue Freezeout” is generally believed to be New York City’s own, rather than the Belmar version: “The most common reading of the song place is the location associated with it at Tenth Avenue in the Hell’s Kitchen area of Manhattan.” Still, you can’t get an intersection more Springsteen-centric than this one.

“Did you hear the cops finally busted Madame Marie for telling fortunes better than they do?” Madam Marie Costello died in 2008 at 93, though she’ll live on the lyrics of “4th of July, Asbury Park” forever. Her fortune-telling booth on Asbury Park’s boardwalk — opened in 1932 — is still there, now run by her granddaughters. After her death, Springsteen posted a tribute online: “I’d sit across from her on the metal guard rail bordering the beach, and watched as she led the day-trippers into the small back room where she would unlock a few of the mysteries of their future. She always told me mine looked pretty good — she was right.”

Put on your archivist’s gloves for a pass through 35,000 pieces of Springsteen memorabilia. By appointment only.