This posting is about Aldi Supermarkets that are based in Australia selling albums from some of the top charting artists.  Not sure if the US Aldi’s are selling these albums.  From what I see in the photos of the albums, these are or should be considered bootleg offerings as they are not artist issued albums. 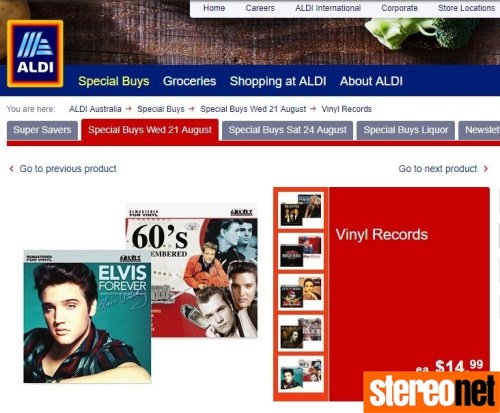 The titles in questions are offered on the ‘Musicbank’ label, and fine print on the album covers is reported to state “they have licensed the music for home use”.

Some forum commentators have alleged the albums are bootlegs, while others have suggested that the titles released may be out of copyright and free for anyone to reproduce.

Musicbank Limited predominantly releases live albums, and describes itself on its Facebook page as “an entertainment company that deals with audio-visual production, advertising and talent management.”

Searches reveal that official websites relating to Musicbank are no longer active, and the only email address is a free Gmail address.

When contacted about possible copyright issues by ALDI selling the LPs, the Australian Recording Industry Association (ARIA), said they would liaise with Music Rights Australia to investigate further.